On the ground floor of block 153, built on the road running between the city gates of Antivari (today Stari Bar, Republic of Montenegro) and the church of St. Nicolas, is a room measuring 5.60 x 2.23 meters that would originally have had a barrel vaulted ceiling. Sections of the room’s southern wall are still covered with layer of relatively thick plaster, and in this plaster numerous graffiti etchings are visible. Graffiti represents an anthropological social reality that is too full of complex meaning to be attributed to pre-defined schemes (Petrucci 1996; Tedeschi c.s.). Thus, in order to interpret this rich source of clues about the social history of the building, one must not forget the context in which they were made, consider their contemporaneity, and attempt to interpret them as a whole (Mannoni, Rossi 2006). 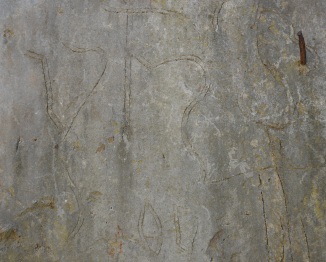 All graffiti etchings and the contexts in which they were found were recorded, photographed and measured. The graffiti would have been etched into the plaster whilst it was still wet and are located within the central area of the wall, between 0.60 and 1.55 meters from floor level. A total of eighteen etchings of different typology are present. In particular, names and letters of the alphabet can be identified.